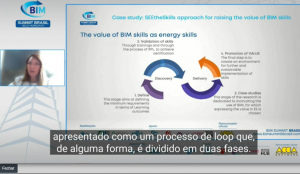 The BIM Summit Brasil is a Brazilian event that has its origin in the same molds of the European BIM Summit event. In its 1st edition, in 2022, it was held in virtual form, the event took place in Spain at the World Trade Center in the city of Barcelona It is encompassed through the participation of Lihnida Stojanovska for the participation on the speech about How to get value to BIM skills. Case study: EU Program SEEtheSkills Organizer of the event was BIM Academy, Offsite Hub Brasil Soluções & Inovações (OHB), Grupo AJ and Serviço Brasileiro de Apoio às Micro e Pequenas Empresas – Departamento Minas Gerais (SEBRAEMG).